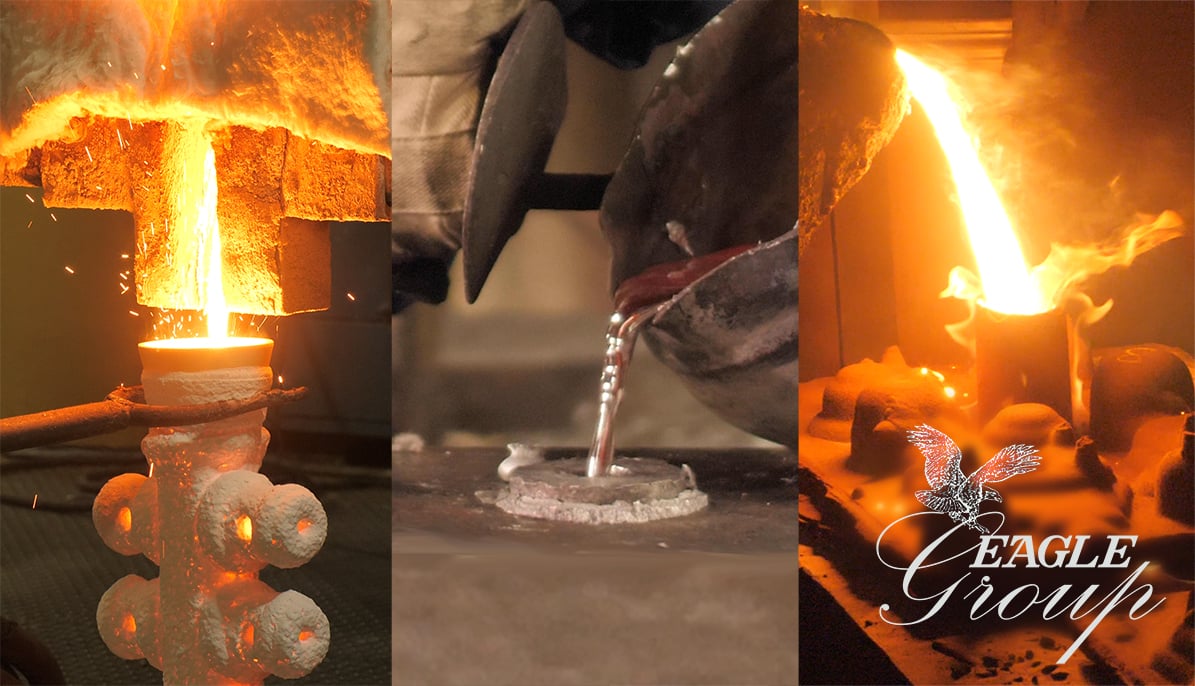 This introduction to metalcasting provides a brief overview and history of the casting process, as well as an outline of common casting techniques in use today. The goal of this article is to give new manufacturers a better understanding of how metalcasting works and what steps are involved in producing cast products. By the end of the article, the reader should have a clear picture of the opportunities presented by metalcasting, and a sound appreciation for its potential as a modern manufacturing method.

For more detailed information, click the links and buttons placed throughout this article to connect with posts, pages and Ebooks that dive deeper into specific aspects of metalcasting.

A manufacturing process in which molten metal is poured into a cavity (mold) that holds the metal to a specific shape as it solidifies.

1. Create the master pattern and corebox. The first step in metalcasting is to create an object with a similar shape to that of the desired product, called a pattern. The pattern is a tool used to produce the mold, and must be slightly larger than the final product in order to account for shrinkage during solidification. In metalcasting, patterns are often produced through CNC machining. Similarly, cores, as outlined in Step 2, are created using another type of tooling: coreboxes. Casting methods that utilize reusable molds, like permanent mold casting, do not normally require patterns or coreboxes. In these cases, toolmakers can produce the mold and core directly.

2. Create the mold and core. In order to successfully produce a casting, the manufacturer must first create a mold cavity to contain and form the molten metal. In many cases, they must also produce a core that fits inside the mold, forming hollow cavities inside the final part. Molds and cores can be reusable, as in the case of die casting or permanent molding, or single-use, as in greensand casting or shell mold casting.

3. Melt the alloy. Next, the manufacturer must melt the metal. Often the metal used is an alloy, or a mixture of elements that, together, provide optimal mechanical properties. Melting processes vary: in its simplest form, melting consists of placing alloy in a receptacle with a higher melting point and heating it over a burner or open flame. More contemporary melting methods, like induction melting, rely on the physical properties of alloys to melt them and bring them to casting temperature more efficiently.

4. Pour the molten metal into the mold. Once the manufacturer melts the alloy, they must pour the molten metal into the mold cavity. Normally this is accomplished with a ladle system, which supports the pouring process and allows operators to control pouring speed either manually or automatically. Incorrect pouring techniques can lead to defects, as gases can become trapped inside the mold, leading to holes in the resulting casting.

7. Finish the casting. Most cast parts must undergo finishing processes like cleaning (removing excess material from the part); gate removal (removing the pouring channels from the part); heat treatment (heating and cooling the castings in a controlled environment to augment physical properties) and inspection for quality control. Many products also pass through CNC machining processes to improve dimensional accuracy and aesthetic value. 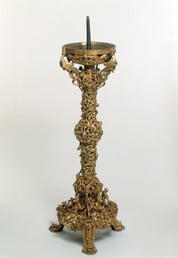 Much of what we know today about the origins of metalcasting is based on archaeological findings. Fortunately, castings' durability means that many casting artifacts have survived for thousands and thousands of years.

Early castings were often artistic statues, tools and weapons, and the first metals used in casting were copper and tin, or an alloy made from the two metals called bronze. Civilizations on the Asian and European continents experimented with other materials and continued to utilize casting for thousands of years. As processes were refined and techniques recorded in precise language, the scope of cast products also expanded. In the Middle Ages, European foundries were tasked largely with producing church bells.

In the 20th century, automotive manufacturing–led in part by Ford Motors' flow production techniques–increased demand for castings and led to further breakthroughs in process. Steel was invented, and by the middle of the 20th century stainless steel was widely used for casting. Both World War I and World War II tested the limits of casting in the United States, Europe and Japan. Old processes, like investment casting, were further refined to produce better castings faster. New processes, like die casting and shell mold casting, were also developed during the 20th century.

The following metalcasting processes represent some of the most common and most versatile techniques in the casting facility's arsenal. Some methods date back thousands of years while others are less than a century old, and each of these processes is the ideal casting method for certain types of products. Here we offer a brief overview of each process. For more in-depth information, click the links provided in each section.

The oldest metalcasting technique still in use on an industrial scale, investment casting is an ingenious process that involves covering a wax pattern shaped like the final product in refractory material, then melting out the wax and replacing it with molten metal.

Greensand casting is a versatile metalcasting technique with low tooling costs in which moist, clay-bonded sand is compacted around a pattern to form a mold. The resulting molds can be used to cast nearly any alloy, and the majority of sand used to form the mold can be reclaimed and recycled.

Also known as shell casting or shell molding, shell mold casting was invented in the mid-20th century by a German engineer, and was subsequently perfected by manufacturers in the U.S. and Germany. The process involves coating a pattern with resin-coated sand grains that bond to one another with the application of heat. Shell mold casting provides a high degree of precision and excellent repeatability.

Permanent mold casting, as its name implies, utilizes reusable molds instead of the disposable molds involved in sand casting. Tooling can be complicated to produce, and alloys are somewhat limited based on melting temperature, but high-volume runs can achieve low per-part costs. Repeatability, surface finish and precision are excellent in permanent mold cast parts.

Another variation of sand casting, airset casting–also known as no-bake casting–utilizes chemically bonded sand that solidifies at room temperature. The process can be more time-consuming than greensand casting or shell molding due to time required for molds to solidify, but tooling is inexpensive and excellent dimensional accuracy and surface finish can be achieved through airset casting.

Today, metalcasting is a $33 billion industry that accounts for nearly 200,000 jobs in the U.S. alone. Castings are utilized in 90 percent of durable goods, from construction equipment to medical devices. According to the American Foundry Society, "Most people are rarely more than 10 feet away from a casting." New technologies and improved processes are making metal castings better and more complex than ever, which means that foundries are able to expand into new markets, further increasing the prevalence of the metalcasting industry.

Casting facilities regularly partner with the U.S. government and universities to ensure that the casting industry benefits from cutting-edge research. One such partnership with the U.S. Department of Energy has already succeeded in developing lighter castings, castings that require less post-processing and castings that make use of a wider range of alloys.

Relatively new technologies, like 3D printing, can be used in tandem with metalcasting to create prototypes, patterns and even molds more quickly than before. Advocacy organizations are working to make this sort of technology, and others that can help advance the casting industry as a whole, more widely available. The Steel Founders Society of America (SFSA) is currently developing a robotic cell that can be studied and adopted by member foundries. Their goal is to improve automation industry-wide, making it possible to re-shore more casting jobs.

Meanwhile on the outreach front, the American Foundry Society (AFS) carries out a variety of programs oriented toward educating both the public and U.S. lawmakers on the potential of metalcasting. From their partnership with the National Association of Manufacturers in promoting Manufacturing Day to their annual Government Affairs Fly-in, AFS makes it a priority to prepare the next generation of casting professionals.

After a long history of innovation, metalcasting is still at the forefront of manufacturing technology. While the essential process remains the same as that used by the first metalcasters, casting has evolved beyond its humble origins to meet the needs of modern consumers.