CNC Machining is often the last step in metal manufacturing, or sometimes the only process involved. Compared to other metalworking techniques, CNC machining is capable of meeting the tightest tolerances, and producing the most accurate, precise products over and over again.

To understand the origins of CNC Machining, it's important to break the phrase down into three parts:

In the late 1940s, John Parsons of Parsons Corp. in Traverse City, MI, developed a system to control machining equipment by feeding it punched cards with holes corresponding to coordinates. Starting in 1949, Parsons joined the U.S. Air Force at an MIT laboratory to further develop what was to become numerical control.

The team behind numerical control developed a process to produce aircraft parts that required a high degree of accuracy and precision, and took manual operators hours to work through. With the addition of numerical control, part after part could be produced with little human oversight.

The Advent of CNC 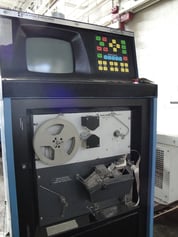 While early NC systems were revolutionary in their own right, there was still plenty of room for improvement. For starters, machine tools had to be programmed using a tedious process, and errors were common. Different companies developed different programming languages, resulting in confusion and incompatibility that, at first, stymied the growth of NC machining.

In 1959 when APT was developed, computers weren't quite mainstream, but the technology grew quickly enough. Early NC machines could be programmed and controlled by small computers attached to each machine.

These days, many CNC machine shops make use of Distributed Numerical Control (DNC), which allows a programmer to control several CNC units from a central computer. Many CNC interfaces are built around user-friendly software, and require much less training to operate than their forebears.

The Future of CNC Machining

As global demand for CNC machined products grows and changes, a wide variety of innovations are currently taking place in the CNC machining industry.

Robotics - more than just mills and lathes, CNC is increasingly being applied to industrial robotics. In some factories, machines not only handle tasks like cutting and welding, but also transportation and assembly.

3D Printing - both a competitor to CNC machining and a complementary process, industrial 3D printing is also growing rapidly. While machining is a subtractive process–starting with solid stock and cutting away material to form a shape–3D printing is additive. In many cases, designers can 3D print a prototype, and use it as a pattern to configure CNC equipment. In other cases, products can be accurately and precisely 3D printed straight from design software.

At-Home CNC - The market for DIY CNC kits and inexpensive CNC machinery has grown exponentially over the past few decades. While they don't offer anything new in terms of processes, these at-home CNC stations make product development easier, faster and cheaper than ever. With the financial burden of metalworking vastly decreased, there's no telling what inventive products might come out of a hobbyist's garage.