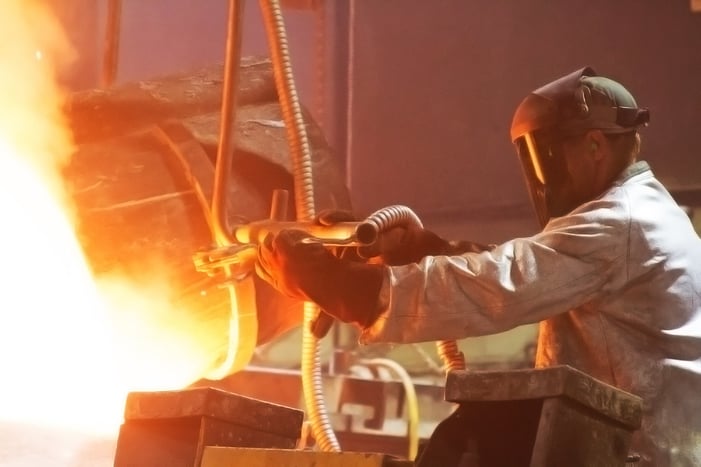 We've already covered the history of shell molding, as well as a list of need-to-know terminology, so now it's time to start exploring how shell molding works. Keep in mind that this post presents a brief overview. We'll describe each step in more detail as we move along in the Introduction to Shell Molding blog series.

The shell molding process begins with the creation of a pattern (see left). Different foundries use different techniques to produce patterns, but the goal is essentially the same. A pattern is an approximate replica of the part to be cast, taking into account projected shrinkage and other demands of the process.

To create a two-part shell mold, in which two halves are combined to create a full mold, two patterns must be produced. One will create the bottom half of the mold, or the drag, and the other will create the top half, or the cope.

Next, the pattern needs its vital sister part: the corebox (see right). The corebox is a tooling that forms the core, which then fits inside a mold so the casting can have a hollow cavity in the middle. Coreboxes are created through a process very similar to that of patterns. Again, the corebox (and the resulting core) must account for the metal shrinking as it cools in the mold.

Once the corebox and the pattern are ready, it's time to get ahold of some resin-coated sand. When heated to the appropriate temperature (around 550 degrees F), the resin-coated sand grains bind together and begin to set. The corebox is filled with sand and left to sit while the sand bonds and solidifies. Once enough sand has bonded against the walls of the corebox, the rest of the sand is poured out, leaving a hollow core.

Similarly, the pattern is heated to an appropriate temperature and covered in sand. The sand-covered pattern is then left to sit until the sand has bonded. Usually, the sand walls of a shell mold will be between 7 and 8mm thick.

When both the core and the shell mold are cool and ready to go, they must be assembled. The mold is removed from its pattern and the core is removed from its corebox. Then, the core is inserted into the drag (the bottom half, remember?) and covered by the cope. The two halves are sealed using glue, or a combination of glue and other fasteners, and if everything's been done right up to now, the shell mold is ready to get poured.

4. The fun part: pouring the casting 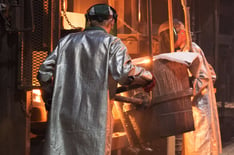 Pouring the casting is a lot like moving molten metal from a bucket to a teacup, except on a much larger scale and, fortunately, assisted by machinery.  If you've never been to a foundry and seen the process, I'd recommend booking a tour as soon as possible. The Eagle Group would be glad to show you around their facilities.

Prior to being poured, metal is heated in a furnace to extremely high temperatures. The exact temperature varies between materials, but steel alloy is usually poured at 3,000 degrees F. Once poured, the metal must sit until it's solidified.

5. Shaking out the sand

Once the metal is sufficiently cooled and solidified inside the mold, it's time for shakeout. Shakeout is basically exactly what it sounds like: vibrating the mold and casting so that the sand breaks apart and falls away. Plenty of innovations over the years have improved this aspect of the shell molding process, and we'll discuss those in a later post. For now, it's time to move on to finishing. 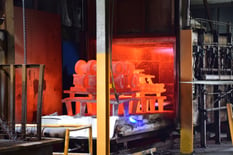 The finishing process for a shell mold casting varies widely depending on the part being cast, the materials used and the foundry's facilities. For example, some parts require machining. Some only need to be cut out of the molds and have their rough edges ground down. Others need to be heat treated (see right). Others, requiring more strength, need to be heat treated several times. While the shell molding process allows foundries to produce intricate parts, there are some cases when multiple pieces will be cast and welded together.

One benefit of the shell molding process, compared with other metal casting techniques, is that castings produced this way often require minimal finishing. The use of a core in shell molding replaces machining in many cases, and the surface finish achieved with shell molding is already comparatively smooth. While the setup steps of shell molding are more complex (and therefore more expensive) than casting methods like greensand, the overall process is often simplified, resulting in lower per-part costs.

Next Steps in the Shell Molding Process

If you're thinking that the shell molding process might be right for you, the best way to proceed is to request a quote for services. The Eagle Group can work with you to determine the best, most cost effective way to proceed. We'll provide a quote and consultation completely free of charge, so you have nothing to lose--go ahead, click the button!

Stay tuned for more from the Introduction to Shell Molding blog series! In the meantime, feel free to revisit previous blog posts from the series, or contact us to get all your questions answered. 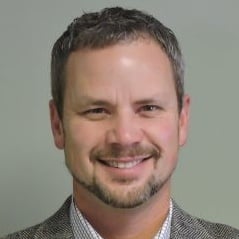