This year the Steel Founders' Society of America (SFSA) introduced a national competition to engage students with steel casting and help foundries connect with the next generation of manufacturing professionals. Inspired by History Channel's Forged in Fire, the Cast in Steel competition brings teams of engineering students from around the country together to find out who can cast the best Viking axe. Testing, judging and awards took place prior to CastExpo in Atlanta, GA.

Two student teams from Iowa State University worked with mentors from the Eagle Group, both of whom are alumni of the University. Ryan Horak, Process Engineer at Eagle Alloy, graduated in 2016. He volunteered to guide a team from his alma mater in producing a Viking axe using airset casting. AJ Menefee, QC & Engineering Manager at Eagle Precision, mentored a second Iowa State team using the investment casting process.

Knowing the value of casting experience firsthand, Horak opted to leave the design to the students. "They have similar experience to me when I first started my job," Horak says. "They know the basis of casting, but not all of what goes into it. I didn't do everything for them. I let them figure it out for themselves." Menefee's team also provided their own design, and he followed through by ordering patterns and running the axes through the investment casting process, just as he would do with a customer. 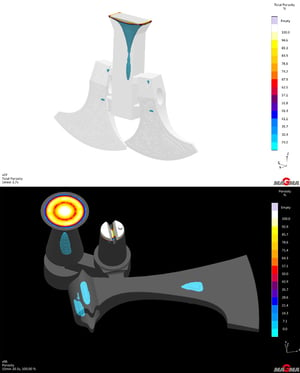 Menefee's team noted in their technical report that they chose investment casting because of its ability to produce parts with intricate designs. The team was able to design multiple variations in Solidworks and select a design based on the "best combination of geometric complexity and part functionality." Horak's team also chose to showcase the advantages of steel casting by including intricate design elements. They ultimately decided on a design that would work well with airset casting, favoring reliability and performance.

One of the biggest challenges was the time crunch. Horak's team had hoped to make use of Iowa State's hybrid manufacturing machine to produce patterns, but multiple design iterations ate into available time. Menefee noted similar constraints, but his team's biggest obstacle came from a new method of using 3D-printed wax molds. The Viking axe proved to be an excellent opportunity for foundry engineers to explore potential problems and solutions to the new method.

While the students provided their own initial solidification simulations, both Horak and Menefee helped their teams adjust parameters to account for real-world gating and riser scenarios. According to the technical report, Horak's team went through 14 revisions before arriving at a final gating design. Choosing the right material was also important, as the axes had to compete in durability and sharpness tests. Jason Bergman, a metallurgist and yet another Iowa State grad at Eagle Alloy, facilitated the decision.

Cast in Steel: the Competition

With over 20 teams from 16 universities entering Cast in Steel, competition was fierce. All teams were required to submit a technical report detailing the entire casting process from design to completion. At a special event held just prior to CastExpo 2019, the actual axes were tested and examined by experts. Tests included chopping through a piece of steel (simulating body armor) and cutting a piece of rope to show how much sharpness the axe had retained. Judge and two-time champion of Forged in Fire Ben Abbott participated in the event, remarking that "a good Viking axe to me should be well balanced. It should be...almost deceptively light. It should be able to hold an edge really well, and be sharp enough to cut through some rope."

Above: Eagle Group/ Iowa State axes in competition next to their pierced "armor" plates

Regardless of who took home this year's prizes, everyone involved in Cast in Steel stands to benefit from the work that went into the Viking axes. According to Menefee, "The competition gets students involved in the industry and helps them understand what it takes to make good parts." Ryan Moore of SFSA also remarked that the competition serves foundries as a way to recruit new, skilled employees: "Cast in Steel connects the younger folks with foundries, so they can potentially leverage that connection to bring them into the workforce."

When students get a glimpse of the opportunities available in modern metalcasting, and casting facilities work directly with the next generation of manufacturers, it's a win for the entire industry.