All About Al: Crash Course in Aluminum History

All About Al: Crash Course in Aluminum History 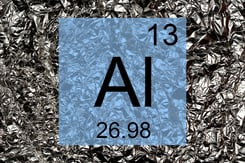 Aluminum is the third most common element on our planet. It’s by far the most abundant metal, and it’s also one of the most versatile.

Aluminum is light, strong, flexible and corrosion resistant. It can also be shaped relatively easily, in both a solid and molten state, and can be stamped to widths thinner than the human hair.

You’ll find aluminum in everything from buildings to cars, from Pepsi cans to laptops, and from power lines to bullet trains. But where does this one-of-a-kind metal come from, and how did it get to be so widely used?

Most common elements on earth: 1. Oxygen; 2. Silicon; 3. Aluminum. Kind of ironic that third place gets the bronze medal, isn’t it?

Aluminum was first discovered in 1824 by Danish physicist Hans Christian Oersted. Oersted used the process of electrolysis to separate aluminum from other elements. Over the next 60 years, scientists, industrialists and entrepreneurs developed new processes of obtaining aluminum. Finally, in the late 1880s, three scientists got it right, and opened the door to commercial-level aluminum production.

Where does aluminum come from?

Aluminum is all over the place. It makes up nearly a tenth of the earth’s crust. But unlike gold, copper and iron, you can’t just go out and find a vein or a chunk of aluminum. This is because aluminum combines with other elements very easily. In nature, you won't find aluminum by itself.

Thanks to the methods outlined above, we're now able to separate aluminum from the other non-aluminum substances. Most new Al is extracted from bauxite, a clay-like substance that contains high amounts of aluminum. Bauxite can be found all over the world, in abundant supply.

Today, recycling is also a major source of aluminum. In fact, estimates show that over 75% of aluminum ever produced is still in use today. Aluminum can be melted, purified and reformed without losing any of its winning chemical properties. Not only that, but the process of recycling aluminum is much less energy intensive than producing new aluminum from bauxite. All things considered, the Aluminum Association estimates that each recycled can saves enough energy to listen to a full album on an iPod.

The methods of production for aluminum products are almost as varied as the products themselves. Some key processes include casting, extrusion, and hammering.

Next in the All About Al blog series, we'll go over aluminum's unique properties and its best uses in production. Subscribe to The Eagle Group Blog to make sure you don't miss any important updates.

To learn how aluminum compares to other metals, and find out if it's the right material for your cast products, download our free ebook, Manufacturing with Aluminum.

Jim Smith, Jr. is the Technical & Sales Manager at Eagle Aluminum Cast Products in Muskegon, MI. Given his father’s career as a mechanical engineer, Jim grew up in foundries and often used castings his father brought home as toys. During his college years and into his first jobs, Jim developed skills in quality, engineering and customer service. Jim joined Eagle Aluminum in 2012 as a Technical Analyst and now manages all of the company’s Technical and Sales functions.